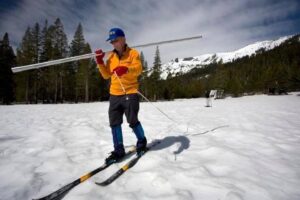 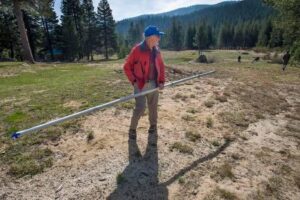 “We’re standing on dry grass, and we should be standing in 5 feet of snow,” Brown said. “We’re in an historic drought, and that demands unprecedented action.”

Brown’s executive order directs California’s more than 3,000 urban water providers to collectively cut their water use by 25 percent compared with 2013. The State Water Resources Control Board is expected to impose the new restrictions by mid-May, setting a different target for each agency depending on how much water its customers use per capita and conservation progress since last year.

With 2015 opening with some of the driest weather in California history, Brown has faced increasing pressure to act on the drought. His call last year for residents to voluntarily reduce their water use by 20 percent statewide resulted in increased conservation, but it ultimately fell short. Water agencies collectively managed to meet this target only once out of the past eight months.

“I called for 20 percent voluntary, and we’re going to get more like 9 percent,” Brown said. “That’s not enough.”

The new goals will be mandatory. Felicia Marcus, chairwoman of the water board, said her agency will decide next month exactly what tools it will wield to ensure compliance. But she suggested water agencies that don’t meet their targets are likely to face fines.

“Enforcement is definitely on deck in this next phase,” she said.

Brown’s directive calls on the state to create financial incentives for homeowners to replace thirsty lawns with drought-tolerant landscape, as well as rebates for new water-efficient appliances. But he said local water agencies also might issue cease-and-desist orders on water users if they fail to meet the conservation order.

“I would hope that we don’t see this in some punitive way, but that we see the challenge,” Brown said. “(The) reality is that the climate is getting warmer, the weather is getting more extreme and unpredictable, and we have to become more resilient, more efficient and more innovative. And that’s exactly what we’re going to do.”

In the Sacramento region, water agencies overall cut water usage per capita by about 18 percent from the summer of 2013 to the summer of 2014, according to a Bee review of data reported to the state. That means many already are close to the 25 percent cut mandated by Brown.

Among the other measures in the governor’s order:

▪ A program to replace 50 million square feet of residential lawns statewide with drought-tolerant plants, equal to more than 800 football fields.

▪ A new statewide consumer rebate program to subsidize installation of water-efficient appliances, such as toilets and washing machines.

▪ A ban on watering ornamental lawns on public street medians.

▪ A ban on irrigating yards in new housing developments unless the water is recycled or drip irrigation is used.

▪ Financial assistance for families forced to find new housing because they have run out of potable water.

“People should realize we’re in a new era,” Brown said. “The idea of your nice little green grass getting lots of water every day, that’s going to be a thing of the past.”

Brown’s order requires water agencies that service agricultural areas to develop drought management plans, with increased reporting on water supply and use. But unlike cities, farms will face no conservation targets, mandatory or otherwise.

Marcus said agricultural water agencies already have had their surface water allocations slashed considerably. In the case of farmers dependent on the federal Central Valley Project, many have been told they will receive no water. The State Water Project, which is operated by the Department of Water Resources and also serves some farms, plans to deliver 20 percent of typical contract amounts.

Craig Wilson, former Delta watermaster at the state water board, is among those saying the state should be doing more to force conservation on farmers. He noted that many farmers enjoy so-called senior water rights, which have not been curtailed at all. Many also rely on groundwater, which has been pumped to unprecedented lows in some parts of the state.

Brown’s order requires groundwater users to expand or speed up their reports of water use but does not restrict pumping.

“Ag is where the water is,” Wilson said. “Come up with a plan to cut their water use by 10 percent, 20 percent. I wouldn’t dictate to the farmers how to do it, but tell them to give us the plan that shows how you’re going to do it.”

Officials at urban water agencies mostly cheered Brown’s announcement, saying it will help keep the public focused on conservation as the drought worsens.

“I think he’s upping the ante, and I think it’s important that he does,” said Kevin Wattier, general manager of the Long Beach Water Agency. “You look at what’s happened with this snowpack and we need to step it up.”

Last week, Brown signed a $1.1 billion drought relief and flood protection package, then went on NBC’s “Meet the Press” to address the crisis for a national audience.

Two of the first three months of this year, January and March, were the driest in more than 100 years. Many areas of the state were also hotter than average during these months, shattering heat records in many locations, including Sacramento.

A few miles down Highway 50 from the meadow where the snowpack measurement took place, the only evidence of winter was a patch of snow that could be seen on a hilltop from the window of Strawberry Station, a general store.

“It’s pretty dire,” said David Schlosser, who owns the store with his wife, Jenifer. “It looks like August.”

Schlosser said families heading to the mountains for winter vacations this year stopped and asked how far they had to continue to find snow.

Jenifer Schlosser said that during a major drought in the late 1970s, when Brown was governor before, residents trusted dry years were cyclical and would come to an end.

“Now, with all the other changes – climate change – people are like, ‘Oh, this could be serious.’ ”

At the snowpack measurement, Brown was asked about his own conservation efforts.

“First of all, my own water use is relatively limited, I must say,” Brown said. “We’re very careful of what we’re doing – turning off that faucet a little quicker, getting out of the shower a little faster, and not flushing the toilet every time.”

For the first time in history, a California governor has ordered mandatory statewide water cutbacks. Here are some of the highlights from Gov. Brown’s executive order.

▪ Requires the State Water Resources Control Board to impose restrictions that will cut statewide urban water use 25 percent compared with 2013.

▪ Calls for urban water agencies to create rate structures, fees and penalties that encourage residents to use less water.

▪ Requires all newly constructed homes and buildings to use drip irrigation or microspray systems to water landscape.

▪ Creates a statewide initiative to get California residents collectively to replace 50 million square feet of lawns with drought tolerant landscape.