It’s undeniable that the progress of new crop is ahead compared to last year, the general feeling is it’s somewhere between 10 to 14 days ahead. Weather conditions throughout the risky frost period of March to April have been almost perfect, with a few localised frosts and rainfall not affecting the development in any significant quantity. One concern that a number of parties we speak to in Turkey have is the overall bud count on the vines compared to last year, with regional differences showing either an almost identical number (possibly even slightly up) compared to last year whilst some regions are drastically down. There is the feeling that it’s still slightly too early to tell how big the new crop is going to be and in the next two weeks we should see a much more clearly defined picture.

If we were going to put an estimated figure out there for the coming crop then we would suggest that the coming crop should be min 270,000mt and max 320,000mt. Turkish packers will always tell you that you don’t get a good crop follow a good but potentially there will be three good years on the trot. This can be put down to changing weather patterns globally, improved farming techniques amongst the larger growers and new vines yielding fruit for the first time. This could push the overall expectation of what a good crop in Turkey looks like upwards towards the 350,000mt level, how realistic this talk is remains to be seen in the coming years.

One of the largest factors that is likely to affect pricing going forward is the worldwide demand for Thompson Raisins as Californian crop faces continued reduced crop size compared to the average over the last 5 years. If we say that during 2017 crop there was around 20,000 to 25,000mt dried as raisins due to the cost differential between Sultanas & Raisins in Turkey in terms of raw material price from farmers into the packers (Sultanas 5.3 TL/kg & Raisins 9 TL/KG) we would expect more and more farmers to make that switch this year. The number being banded around by the industry is that the tonnage dried this coming crop may, with good weather conditions during the harvest (Thompsons take longer to dry than Sultanas), increase to somewhere between 50,000 to 60,000mt, this therefore would put pressure on the overall availability of sultanas and in theory close the gap in terms of raw material cost. Both farmers and packers are both well informed on worldwide market prices so with both Chile & South Africa now sold out of Thompsons they will be eyeing up a price increase.

Last week the government announced that on the 24th June 2018 there will be presidential and parliamentary elections in a bold move to seize the momentum and gain a larger ruling majority in parliament. At this moment it’s highly likely that the existing president, Recep Tayyip Erdoğan, will easily win and this is expected to bring some stability to the country. The reason the election may have some influence on the pricing of fruit forward is to do with the use of the TMO (Turkish Monopolies Organisation) to stabilise and increase the prices paid to farmers for material, something they did with a relative amount of success for 2017 crop. By using the TMO to do this the government would have to make some sort of pledge regarding the raw material price long before the actual harvest of the crop so it’s fraught with risk and at this stage completely hypothetical, although in Turkey there’s often no smoke without fire. Why the government may be prepared to take such a huge risk is because they see the areas of Manisa and Izmir as key areas for them to win, something they haven’t done in recent elections, so they are playing to the farmers need & desire for higher pricing. 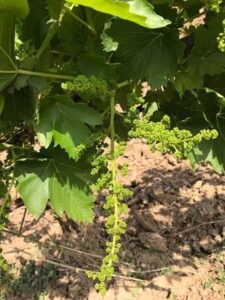 Whilst there are some speculators in the market regarding new crop prices these are only coming from packers that are notorious for trying to buy business and subsequently have been withdrawn as the market firmed a little. As yet it’s too early to say with absolute definition where the prices will be for the coming crop. You have to look at the overall worldwide demand to see that existing price levels from Turkey are extremely competitive when comparing to USA Raisins around $4000mt (including 2.4% duty) & Greek Currants around €2800mt, so if we look forward the price is poised to potentially go upwards to get closer to other vine fruit prices but a decent sized crop could force prices down. It’s a 50/50 call that will play out in the coming months.

In the short term before new crop we will not see any significant reduction as available raw material has almost exhausted itself from farmers into packers, although that’s not to say packers aren’t sitting on unsold quantities. For specific enquiries as always let us know and we’ll offer our best advice on whether the timing is right to book or to wait that little bit longer.