Offers prices of Greek Currants from origin are presently stable and are likely to remain so, at least until any risk of frost damage to the new crop development has passed (early May).

Whilst the rapid fall in Greek raw material prices, over the last two seasons, combined with the reduced subsidy, paid to the grower, may well impact upon total production within the next few years, we do not expect this to significantly affect production from the 2015 crop. As shown below, we also expect a carryover of around 5,600mt, at the end of this season.

Assuming  that a 2015 crop of around 20,000mt is safely harvested, this will give around 17,500 after retention (Although no longer compulsory, packers typically retain and about 12% of their raw material, as being too large or underdeveloped.  This is used in production of alcohol etc). To this we must add the 2014 crop carryover of around 5,600mt, giving a total supply of 23,100 mt, against anticipated total demand of 17,000mt – 18,000mt.

Based on the assumption that there are no significant crop issues, in other World origins, we would expect that the average price for the 2105/6 season, will be slightly lower than that of this season.

This also assumes that Greece remains in The Euro-zone, and that the average Sterling/Euro rate for the period is 1.37 – 1.40. 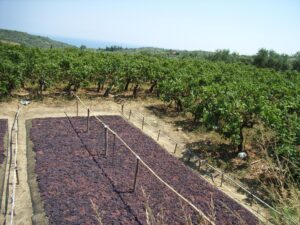 For any enquires of Greek Provincial or Vostizza Currants please contact our buyer Tony Smith tony@chelmerfoods.com or your usual contact…