Last week hurricane Michael hit the pecan area in Georgia.
Rumours suggest that the damage is significant. The upcoming weeks it will become clear what the exact damage will be.

However, first reports are not looking good for the Georgia crop.
Last year Georgia was also hit by a hurricane. In the beginning it was claimed that there was 50% damage. At the end, the damage was negligible.
This year, however, the feeling is that things are much worse than last year.

First of all, we hear that a lot of trees have been blown out of the ground. Also the wind has blown the nuts from the trees onto the grounds.
Next to the heavy wind, there have been heavy rains, which might make it hard for the growers to harvest of the nuts fallen on the ground.
This could mean that a large portion of the Georgian crop could be lost.

Obviously it is still very early. And we will endeavour to keep you up to date on the developments.
For now, we see that most suppliers are off the market to see how much the Georgian crop is damaged. 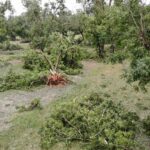 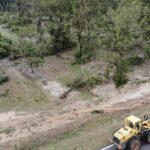