Hazelnuts are grown principally in Turkey (70% of total worldwide production) and Italy (20%), with significant crops produced in Spain, Oregon (USA) and Georgia. The UK obtains the vast majority of its needs from Turkey. Hazelnuts grown in Turkey are harvested during August. The areas under cultivation borders the Anatolia region of the Black Sea from just under east of Istanbul (Akcakoca) through Ordu and Giresun (Kerassunde) to Trabzon in Eastern Turkey, a major centre of production. 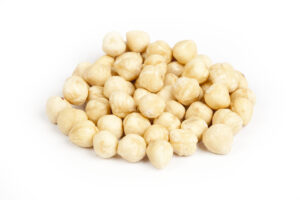 In general the hazelnut tree is grown on steeply sloping banks or in soil which is otherwise unsuitable for other crops. Approximately 5% of Turkey’s population depends on Hazelnut cultivation for their main

income. The actual harvesting is labour intensive, either picking the nuts, which are still inside their outer husk, off of the branches or by simply shaking the trees to make them fall. Drying occurs under the sun out in the open and any visitor to the region at this time of year will witness miles of roadside lined with beds of hazelnuts. After a few days initially to turn the leaves and husk brown, this material is separated from the nut in its shell using a thresher. A further period of natural drying follows, arranged in thin layers over, usually, a tarpaulin. The total period from harvest to completion of drying is normally less than 20 days.

and preparation of hazelnuts, the vast majority of which go for export, Europe being the biggest market. A sizeable quantity of the crop is, however, retained for sale in Turkey. The most modern plants now operating have developed the export markets in blanched, roasted and other processed hazelnuts. These values added products now account for 30% of all foreign sales.