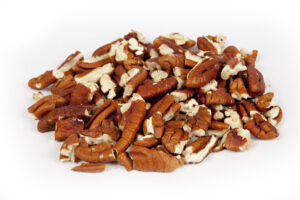 The history of pecans can be traced back to the 16th century. The only major tree nut that grows naturally in North America, the pecan is considered one of the most valuable North American nut species. The name “pecan” is a Native American word of Algonquin origin that was used to describe “all nuts requiring a stone to crack.”

Originating in central and eastern North America and the river valleys of Mexico, pecans were widely used by pre-colonial residents. Pecans were

flavoured because they were accessible to waterways, easier to shell than other North American nut species and of course, for their great taste.

Because wild pecans were readily available, many Native American tribes in the U.S. and Mexico used the wild pecan as a major food source during autumn. It is speculated that pecans were used to produce a fermented intoxicating drink called “Powcohicora” (where the word “hickory” comes from). It also is said that Native Americans first cultivated the pecan tree.

The main grades we stock are Junior Mammoth Halves, Jumbo Mammoth Halves and Medium Pieces however we are able to supply all grades if these are not your first choice.